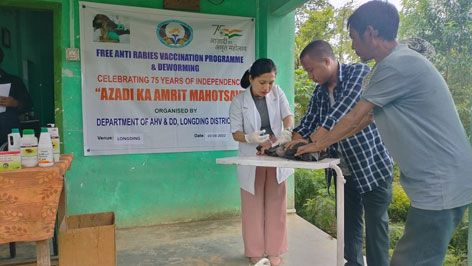 Deworming medicines were also given to the pets.

Rabies is a viral zoonotic disease and it is spread by an infected animal biting another animal or person, said DVO Dr. Taken Kamchi.

Dr. Kamchi said that first anti-rabies vaccination is given when the puppy is three months old and the booster dose must be given annually.

The department also created awareness among the people about zoonotic diseases. (DIPRO)

Maitreyi Ramakrishnan on the Beauty Tips from Her 'Baddie' Grandma

How to Live With Someone Diagnosed With Monkeypox – Inside Edition

The Fitness ‘Rules’ That Are Okay to Break