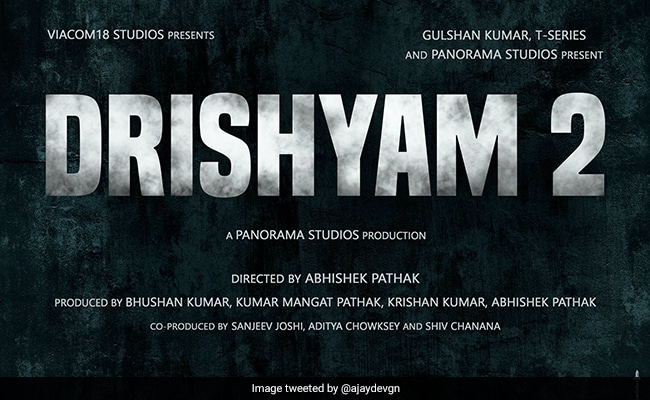 Finally, Ajay Devgn and Tabu have announced the release date of their upcoming crime thriller Drishyam 2. Also starring Akshaye Khanna, Shriya Saran and Ishita Dutta, the film is a remake of the Malayalam movie of the same name, featuring Mohanlal in the lead. The sequel of the 2015 crime thriller will release in November this year. Announcing the release date, Ajay Devgn tweeted, “Attention! #Drishyam 2 releasing in theatres on 18th November 2022.” Soon after he shared a tweet, his fans flooded the comment section. A fan wrote, “Wow, eagerly waiting,” while another wrote, “Wow!! Look forward to it.. hope it is more meatier than drishyam one. That was a fantastic one all the best for #drishyam2“.

Here have a look:

Tabu shared the news on her Instagram handle with the same caption, “#Drishyam 2 releasing in theatres on 18th November 2022.” Check out the post below:

Helmed by Abhishek Pathak, Drishyam 2 went on the floors in February. Tabu shared a picture with Akshaye Khanna, welcoming him to the team. Sharing the post, Tabu wrote, “Delighted to have a gem of an actor on board for #Drishyam2 Akshaye Khanna #TrulyTalented.” Check out the post below:

In the film, Ajay Devgn and Shriya Saran will be reprising their roles of Vijay and Nandani Salgaonkar and Tabu as IG Meera M. Deshmukh. However, the makers have kept Akshaye Khanna’s role under the wraps, and it will be interesting to see how his character adds to the storyline.

Meanwhile, Drishyam 2 will clash with Rajkummar Rao and Bhumi Pednekar’s Bheed at the box office as both are releasing on November 18.

Realme C30 launched in India starting at Rs 7,499: All you need to know

Maverick’ Catapults Past $1B At Worldwide Box Office – Deadline

EXCLUSIVE: Akshay Kumar to perform with female cops at Umang 2022

DID Li’l Masters 5 judge Mouni Roy shares a video & pens a heartfelt note as the show comes to an end; Watch

Kiara Advani in a Manish Malhotra saree shows how to have a desi day with sheer perfection; Yay or Nay?