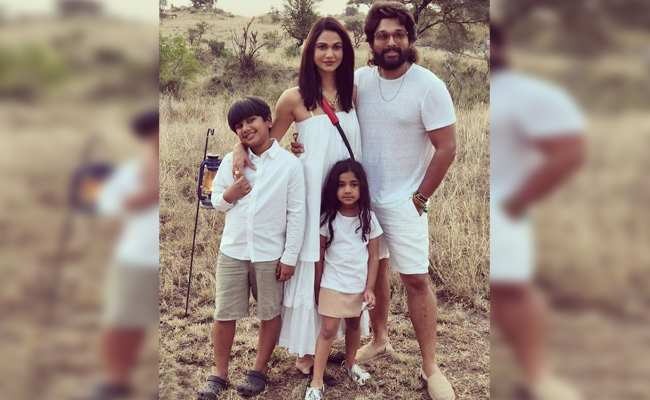 Before ‘Icon Star’ Allu Arjun gets busy with the shoot of the Sukumar-directed sequel of ‘Pushpa: The Rise’, which is scheduled to start in August or September, he is taking a break at the Serengeti National Park in Tanzania.

The actor’s wife, Allu Sneha, posted a family photo from the vacation on her Instagram page.

In the photo, Allu Arjun is seen having a good time with his wife and children — son Allu Ayan and daughter Allu Arha. The image featuring the Allu family has gone viral on social media.

The scripting for the sequel, ‘Pushpa: The Rule’, is said to have been completed and Allu Arjun is expected to return to Hyderabad some time soon to start preparing for the shoot.

In ‘Pushpa: The Rise’, Allu Arjun plays an underdog who becomes the boss of a sandalwood smuggling syndicate.

The sequel will see him being the boss, taking on the powers that be, including his bete noir, the cop played by Faahad Faasil.

Rashmika Mandanna, who plays Pushpa’s love interest, Srivalli, will have a bigger role in the sequel, according to the makers.

There’s much speculation, meanwhile, over Tamil star Vijay Sethupathi, fresh from his dream run in Kamal Haasan’s ‘Vikram’, joining the cast, but the makers of Pushpa are not saying anything about it.

How old is Shroud? Tracing streamer's age and other personal information

OTT Movies and Web Shows Releasing This Weekend (Aug 19): She Hulk to The Next 365 Days & more