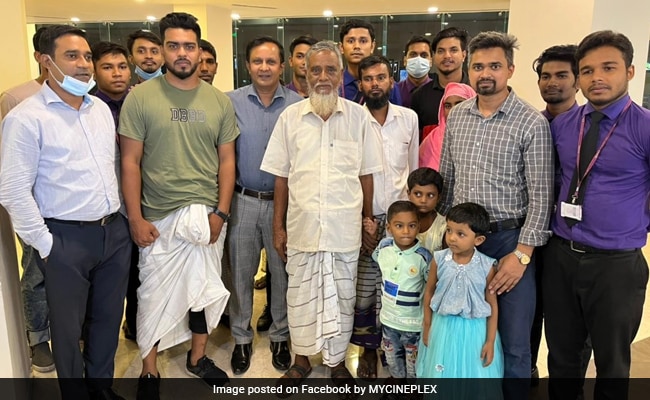 Saman Ali Sarkar watched ‘Poran’ with his family and the stars of the film.

Star Cineplex, part of leading multiplex chain in Bangladesh, has issued a clarification after a video circulating on social media claimed that an elderly man was denied ticket at one of its multiplexes because he was wearing a lungi. The video, that appeared on Wednesday, went viral in a short time. The man in the video was identified as Saman Ali Sarkar. He was quoted as saying that he went to a Star Cineplex theatre at Dhaka’s Sony Square branch to watch “Poran” but was denied ticket, according to Dhaka Tribune.

The Cineplex clarified on its official Facebook page that it does not discriminate against customers based on anything.

“We would like to clarify Star Cineplex does not discriminate against customers based on anything, least of all a person’s attire. No such policies exist at our organisation that would deny a person the right to purchase a ticket because of them choosing to wear a lungi. We want to emphasise everyone is welcome to experience their favourite movies at our cinema halls,” Star Cineplex said in the Facebook post.

“The incident being circulated through social media is most likely the result of an unfortunate misunderstanding. We are deeply shocked to see such an event take place and grateful to the relevant parties for bringing it to our attention,” it further said.

In the viral video, the man was heard saying that the theatre staff refused to sell tickets to him because he was wearing a lungi, reported Dhaka Tribune.