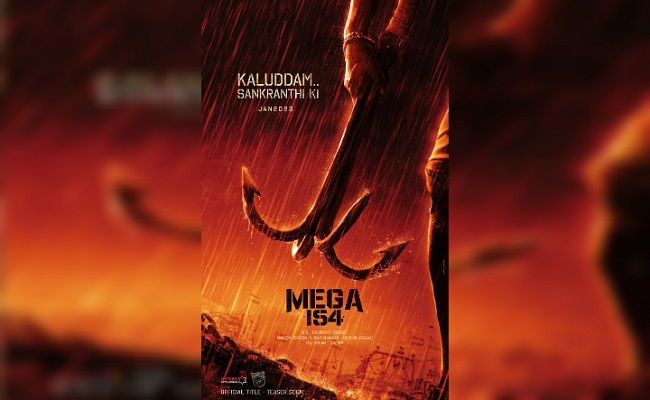 In Telugu, the Sankranti season is one of the most eagerly anticipated times of year for movie releases.

In order to maximise theatrical box office receipts, most high-budget films are favoured to be released around this time period. Things are about to become interesting now that Chiranjeevi has entered the Sankranti race with his ‘Mega154’.

Chiranjeevi’s 154th movie, which is being directed by Bobby (KS Ravindra), is all set to hit the screens during Sankranti 2023. The makers, who took to their socials, announced the same on Friday.

“Let us meet at theaters in Jan 2023,” the makers of ‘Mega154’ (working title) announced through a poster. According to rumours, the film will be called “Vailtair Veerayya” and will tell a tale set in a well-known region of Vishakhapatnam, Andhra Pradesh.

In the film, described as a mass action blockbuster loaded with all the commercial components, Shruti Haasan plays the leading heroine opposite Chiranjeevi.

The movie’s producers are Naveen Yerneni, Y Ravi Shankar, and GK Mohan, with Mohan serving as a co-producer. A top-notch technical team is working on the project with a number of well-known actors.

Sonali Bendre says she lost films due to influence from underworld

Exclusive! Karan Wahi talks about his return to Channa Mereya: I was not ready to give 30 days a month to TV because I feel I’ll burnout.