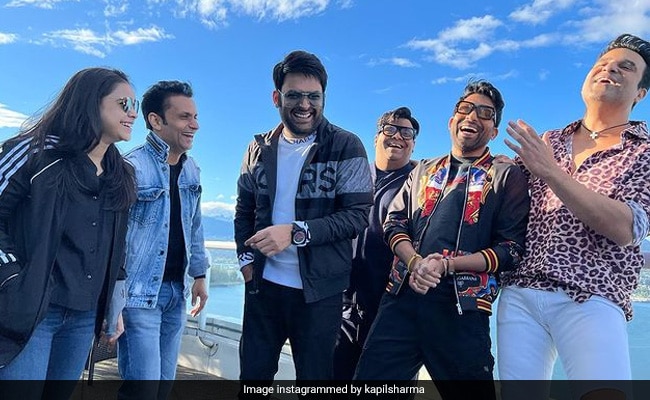 Kapil Sharma’s fame as a comedian is not restrained to India alone. The comedian’s name is known by his fans in the country and abroad. And, that’s why The Kapil Sharma Tour around the world is making quite some noise. Currently, after the success of the third season of his comedy show The Kapil Sharma Show, the celebrity and his team have dived into a tour abroad. Kapil’s last social media post showed us that he and his crew were en route to Canada. His latest post is from the land of Vancouver, Canada. And, the photos are simply adding brightness to our day. In the photos shared by Kapil on Instagram, we see Krushna Abhishek, Kiku Sharda, Chandan Prabhakar, Rajiv Thakur and Sumona Chakravarti laughing their hearts out. The caption read, “Crew that laughs together stays together” and also included a heart emoji. What’s more? Kapil Sharma wrote that his ensemble was styled by none other than his wife Ginni Chatrath.

Just a day before blasting us with photos from their Vancouver tour, Kapil Sharma shared a series of pictures that were clicked before leaving for Vancouver. Here, the team is dressed in their best travel attire. Kapil’s caption read, “Flying to Vancouver now. Can’t wait to meet our lovely fans in Canada.” Friends and fans flooded the comment section with best wishes for the trip ahead.

Kapil Sharma’s antics always leave us entertained. And, when the comedian is featured in a video alongside Bollywood superstar Akshay Kumar, we know what’s waiting for us. In the clip, we see Kapil getting fidgety about an early morning workout session with Akshay Kumar. Kapil quickly gets ready to visit the actor’s gym. While Akshay Kumar looks fresh, Kapil barely drags himself to the gym. Take a look:

Kapil Sharma has featured in his Netflix special, Kapil Sharma: I’m Not Done Yet and in films such as Firangi and Kis Kisko Pyaar Karoon.