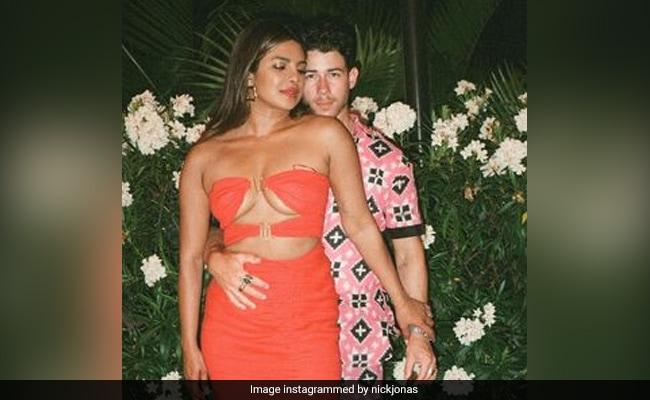 Keeping up with the spirit of Throwback Thursday, Nick Jonas shared one stunning shot from Priyanka Chopra’s birthday festivities (Her OOTD gave it away). In the mushy picture, the star couple can be seen posing together happily. Nick Jonas captioned the post: “Lady in red.” For her birthday festivities, Priyanka Chopra opted for a cutout red dress and she slayed. Nick Jonas kept it rather casual in a printed outfit. Priyanka Chopra celebrated her 40th birthday in Mexico with family and friends. She was joined by husband Nick (obviously), mom Madhu Chopra, manager Anjula Acharia and cousin Parineeti Chopra among others.

Posting pictures from her birthday celebrations last month, the actress wrote a long note, thanking husband Nick Jonas. “Just a girl and her birthday squad! So grateful and thankful to be surrounded by so much love and to be able to spend time with my nearest and dearest. (Even though a lot of them flew in from very far). The most incredible celebrations, planned and executed to perfection by my love Nick Jonas. Words are not enough to thank you for the most memorable birthday… you really know how to love baby. I’m a lucky girl,” read an excerpt from her post.

The couple welcomed a daughter via surrogacy this year. Announcing the arrival of their baby, the star couple shared a statement in January this year. They named her Malti Marie. The statement read: “We are overjoyed to confirm that we have welcomed a baby via surrogate. We respectfully ask for privacy during this special time as we focus on our family. Thank you so much.”

Priyanka Chopra and Nick Jonas met at the grand fashion event Met Gala 2017, where they represented designer Ralph Lauren. The singer had shut down an entire Tiffany’s store in New York to pick out Priyanka Chopra’s ring. He had proposed to Priyanka on her birthday while vacationing in London. They got married at the Umaid Bhawan Palace in 2018.

Priyanka Chopra’s next project Citadell, it is a multi-series with productions from India, Italy and Mexico and it also stars Richard Madden and it will be directed by the Russo Brothers. Citadel is Priyanka Chopra’s second project with Amazon Prime Video after announcing the Sangeet Project, a sangeet-themed dance reality show, which she will host with Nick Jonas. Last year, Priyanka Chopra was seen in Netflix’s The White Tiger, based on Aravind Adiga’s Booker Prize winning novel. She was last seen in Matrix 4.