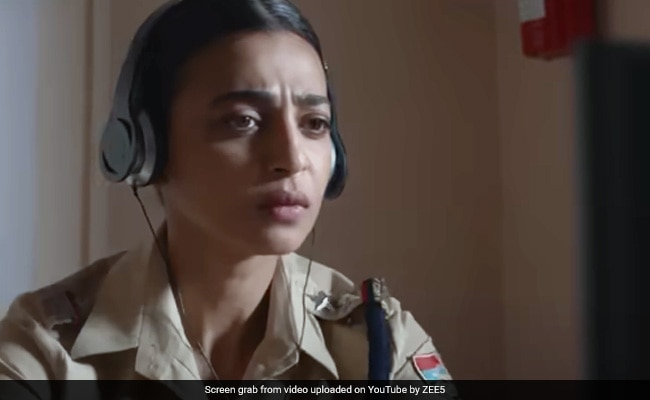 A remake of the 2020 Malayalam thriller of the same title, Zee5’s Forensic retains little else from the original film. It subjects the plot to a series of unwarranted changes and kills any hopes of a meaningful reworking of a film that wasn’t exactly crying out for one.

Even if one were to accept that the Tovino Thomas-Mamtha Mohandas starrer was by no means an unblemished police procedural, there is no getting away from the feeling that all that the Hindi-language rehash by director Vishal Furia does is maul a reasonably good concept beyond recognition. There isn’t a shred in this Forensic that could put the earlier Forensic in the shade.

The serial killings and the police and media response to the crimes are transported from Thiruvananthapuram to Mussoorie, which, of course, serves the purpose of giving the film a fresh look. It sadly does not percolate beneath the surface. The film reeks of staleness. The hackneyed thriller tropes and a generic action sequence in the climax (no patch on the careening and overturning car scene in the 2020 film) only make matters worse. A girl is kidnapped from a church. Hours later, she is found dead in a dump yard. A police sub-inspector and a forensic expert are pressed into service to identify and nab the perpetrator. Over the next few days, more schoolgirls, including the local MLA’s daughter. are kidnapped and murdered on their birthdays.

Word about a psychopath on the loose spreads. Schools are shut in panic. And the cops are under immense pressure to find the serial killer before he or she can strike again. What ensues is supposed to be a dizzy race against time. But Forensic fails to rustle up a single scene that generates palpable tension or genuine suspense.

Forensic stars Radhika Apte as SI Megha Sharma and Vikrant Massey as forensic specialist Johnny Khanna. The two actors are stars have a string of successes repute in the web series space and beyond. But saddled with a floundering script, the duo struggles to prevent the sloppy whodunnit from sliding into inanity.

In the Malayalam film, the two principal characters are related to each other by marriage – the policewoman is the ex-wife of the forensic examiner’s elder brother. Here, the pair is turned into ex-lovers who broke up presumably because of irreconcilable differences on which the film does not throw light. The sparks between former lovers who are now partners in a crime investigation could have led to interesting situation, but Forensic does not give that possibility a proper shot. Although they do inch close to rekindling their affair, the development does not trigger any major waves.

There is a boy who kills his abusive father and flees. And there are girls who are found dead with multiple stab wounds. The sub-inspector is handed the case because the SHO of the police station feels that the inspector under him – the big-talking Ved Prakash Mathur (Subrat Dutta) – isn’t sensitive enough to handle the case.

Bad blood between the Inspector and the SI threatens to throw the spanner in the works as the investigation progresses and the cops are withing striking distance of the suspect. It is quite another matter that nobody in the police station, and this includes the cocky Johnny Khanna, is in a particularly sombre mood as the body count rises and the clues leads nowhere.

In the early scenes, Johnny’s demeanour is particularly is at variance with the gravity of the situation. The man is inexplicably cheerful and pert – unlike in the Malayalam original, he does need an assistant – as he goes about the job of collecting evidence from the crime scenes and examining them under a microscope.

In one scene, Megha asks Johnny: “Tumhe mazaaq lag raha hai?” The question isn’t without reason. The forensic man’s strangely flippant manner is reined in a bit as things turn serious. That about sums up the overall approach of this completely gratuitous remake.

Taking a leaf out of the book of the original film, in which the investigating officer’s boss gives her a file of another cold case to peruse while she is on a two-month break, Forensic ends on a note that indicates that a Part Two of the remake might also be on the way. That would be, to say the least, two much! Scriptwriters Adhir Bhat, Ajit Jagtap and Vishal Kapoor make grotesque changes to the plot and throw in an old man with dementia, an instance of sex reassignment and police department politics that pits SI Megha Sharma against her immediate superior and queers the pitch for her.

Johnny’s elder brother Abhay (Ronit Roy) is Megha’s brother-in-law. She holds responsible for the death of her sister and a niece. Abhay’s surviving daughter, a mentally disturbed schoolgirl who needs constant psychological monitoring, is a key player in the story. So is her therapist Ranjana (Prachi Shah) – a character who did not exist in the original story, certainly not in the avatar she dons here, is also accorded considerable play.

Megha cannot stand Abhay and tries everything in her power to keep her niece Anya away from the man. Johnny feels for his elder brother and strives to convince Megha to have the restraining order against Abhay lifted.

The family drama isn’t what Forensic is about. It is about the shufting dynamics between two law enforcement officials looking for the “birthday serial killer”, who, Johnny infers after conclusive forensic tests, is a child aged 10 to 12 years. Megha is sceptical about that theory and chooses to chase a dwarf instead – another plot twist that did not exist in the Malayalam film.

Like in Akhil Paul and Anas Khan’s Forensic, the name of the real-life Amarjeet Sada of Bihar’s Begusarai crops up. The forensic expert informs the cops that the eight-year-old boy who killed three, including his own baby sister, is the youngest serial killer ever.

The focus here is not squarely on mental illness as an essential cause of criminal conduct. The film tries without success to take the story beyond just twisted motives and seek out mind-bending terrain. Too clever by half, Forensic is a cinematic equivalent of a murder, actually several murders, most foul.

Having a Beer a Day May Be Good for Our Gut Health, Finds Study

Geetha Camp in a Big Shock!