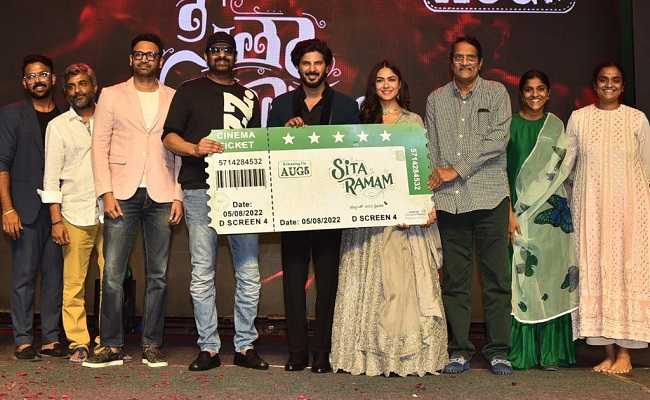 Hero Prabhas compared a film theatre to a temple. Prabhas was the chief guest for Sita Ramam pre-release event and he quoted the statement that theatre is a temple like place for the cine field.

“Films are made for theatre viewing. The producer spent so much to give the audiences a grand visual experience. Directors make the film keeping theatre viewing in mind and then we have great actors. So we should watch a film in theatre,” said Prabhas.

Complementing the team of Sita Ramam, Prabhas added that the film was shot in Russia probably it’s the first Telugu film ever.

“I saw the trailer and it was super. I’m eager to watch this film,” quipped Prabhas.

Hero DQ said he is sad because the journey is coming to end.

“Sita Ramam is a memorable and beautiful ride. Vyjayanthi Movies is family and I can never forget the warmth of Ashwini Dutt garu. Swapna Dutt is a tough personality and amazing person. None can play Sita like Mrunal Thakur. Director Tharun Bhascker is the spoiler in the film. I’m thankful to the incredible cast and crew who worked for the film,” signed off Dulquer.

B-town beauty Mrunal Thakur  said she was mesmerised when director Hanu narrated the script and she was relieved when she learnt it was Dulquer who is Ram in ‘Sita Ramam.’

Producer Swapna Dutt was forced by Prabhas to speak and she thanked for Prabhas for gracing the event because he generally doesn’t step out.

“Prabhas came to this event to wish the team of Sita Ramam and then to support the theatre viewing. I’m sure Prabhas presence will pull in a lot of audiences to the theatres,” said Swapna.

Xavisus Gayden is All About Military, Muscle, and Music

Sambhavna Seth admitted to the hospital